Passed into law in August of 2022, the Honoring our PACT Act piece of VA legislation added hypertension to its list of diagnoses presumed to be caused by exposure to the tactical herbicide known as Agent Orange (AO), making eligibility for disability benefits much easier.

While many other health conditions, like diabetes mellitus type II and prostate cancer, have long had presumptive condition status, this represents a major victory in a long history of working to see high blood pressure added to this Agent Orange list for Vietnam War vets, thus allowing them access to certain VA benefits.

The reason why this decision is so important is the scope of its impact. The CDC estimates that 47% of Americans have this disease and that “more than 670,000 deaths in the United States had hypertension as a primary or contributing cause.”

Its prevalence is particularly felt in the veteran community, where rates of high blood pressure for Vietnam veterans exposed to Agent Orange during military service are found to be higher than in the general population.

Scientific evidence lending credence to this connection has been touted by veterans and veterans groups for years and now the Senate Committee on Veterans’ Affairs has finally acknowledged Agent Orange’s contribution to this chronic disability.

What Is High Blood Pressure?

High blood pressure, also known as hypertension, is conceptually simple:  it’s the phenomenon of too much pressure being exerted against the walls of your arteries and veins.

To understand why this is harmful, imagine a hose filled with a pressure much higher than it was rated for. Eventually, the hose, its connectors, and the pump supplying the pressure will all experience damage. 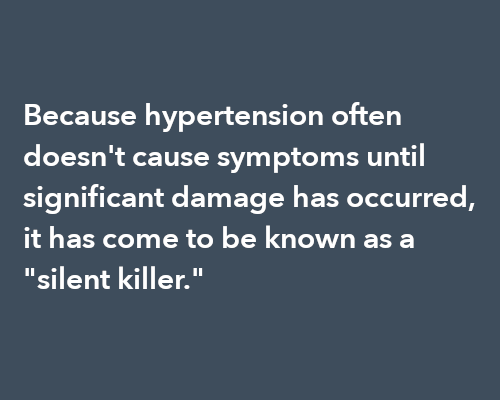 The same concept applies in the human body, where arteries sustain inflammation as a precursor to blockages and heart attacks, the heart grows too large and becomes ineffective, and the kidneys suffer slow, quiet damage, among many other negative effects.  Providers refer to these downstream effects as “sequelae.” And because these changes often happen without obvious symptoms, hypertension has developed a reputation as a “silent killer.”

Why Was Agent Orange Used?

Between 1962 to 1971, Agent Orange was developed by the Army Chemical Corps and used as a “tactical herbicide” to make war operations easier and reduce opportunities for enemies to hide behind foliage. The VA, after many years, acknowledged that “veterans who were exposed to Agent Orange may have certain related cancers or other illnesses.”

The main issue with Agent Orange was its contamination with a chemical called 2,3,7,8-tetrachlorodibenzo-p-dioxin (TCDD), the most toxic dioxin currently known. Through the years, scientific evidence of Agent Orange’s ill effects mounted. Thus, the Department of Veterans Affairs (VA) established a list of presumptive conditions to support veterans suffering from those effects.

How Does Agent Orange Cause High Blood Pressure?

While the reason why the dioxin chemical in AO causes high blood pressure hasn’t been proven, it is theorized to be a result of the dioxin binding with a specific type of receptor (aryl hydrocarbon receptor) commonly found in blood vessels.

When this binding occurs, the arteries have difficulty responding to the body’s natural signals and instructions to decrease blood pressure. Over time, this could theoretically contribute to the onset of clinically-significant hypertension.

As long as there is sufficient evidence that you qualify for a hypertension diagnosis, they presume that it was Agent Orange that caused it. However, for veterans looking to add high blood pressure to their list of service-connected disability benefits, showing “sufficient evidence” of a hypertension diagnosis may not be as straightforward as it seems. To understand why this is the case, read on.

As a Nurse Practitioner and VA C&P Examiner, I’ve served many veterans exposed to Agent Orange who are seeking disability compensation for hypertension. These are a few things to keep in mind to help strengthen your case and prepare for your C&P Exam if you want to add hypertension to your disability claims:

1. Prepare for the VA’s unusual definition of hypertension.

If that’s you, it might help to have your doctor fill out a Disability Benefits Questionnaire diagnosing you with hypertension and documenting what you are currently doing to control it.

2. Examiners are looking for “sufficient medical evidence” to substantiate your hypertension.

Not only do your blood pressure readings have to meet the above definitions, but they must also be documented over a period of three different days and measured at least twice a day.

This is likely not recorded in your medical records in this highly specific way, so the best thing to do is to take your blood pressure at home and keep a log so you can provide it during your exam.

If you don’t have your own blood pressure machine, you can get a reading taken at any local pharmacy. If you’ve been denied a VA hypertension diagnosis in the past on this basis, you can consider filing for a supplemental claim with the evidence outlined above.

Sometimes veterans think that not taking their morning medications might result in a higher blood pressure during the exam and, thus, a better VA rating. This is not only untrue (they look throughout years of BP readings in your medical records, not just the “day of”), but it can be dangerous. In fact, it may have the opposite effect if your exam has to be canceled for you to be sent to the hospital for a hypertensive emergency!

Adding Hypertension for VA Healthcare Benefits After the PACT Act

Some veterans I’ve spoken with recall being told that Agent Orange was “safe enough to drink.” Not only is this wrong, but it couldn’t be further from the truth. We are finding out by the day all of the negative effects this chemical had on veterans exposed during military service. See our article on all of the currently recognized presumptive conditions to see if you may be suffering from another disease caused by Agent Orange.

If you’ve been denied when attempting to add hypertension as a service-connected condition for VA benefits in the past, now is a great time to consider re-filing with the changes introduced by the 2022 PACT Act legislation.

Now that it’s on the list of presumptive conditions after decades of effort, this will positively affect the many veterans and service members exposed during service who are now suffering hypertension’s ill effects.

Nathan is a Nurse Practitioner, Disability Examiner, and Freelance Writer based in West Palm Beach, Florida. As a Certified C&P Examiner, he works to help veterans better understand the VA Disability system, especially from a clinical perspective. You can find him at clinicious.com or on his LinkedIn profile